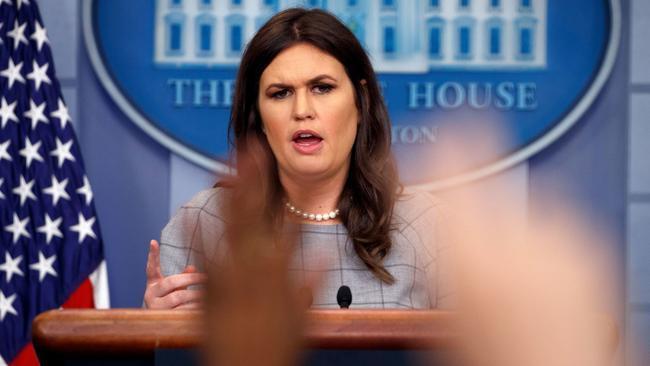 President Trump’s spokeswoman maintained Friday that all of the women who have accused him of unwanted touching or kissing were lying.

“Yeah, we’ve been clear on that from the beginning, and the president has spoken on it,” White House Press Secretary Sarah Huckabee Sanders said when asked if Trump’s position on accusations against the president was that “all of these women are lying.”

Accusations against Trump arose during last year’s presidential campaign, when at least 11 women described physical actions by the president that they found offensive. Trump at the time called the women “horrible liars” and suggested in at least one case that he was not physically attracted to the woman making the accusation.

The president himself, however, was caught bragging in vulgar language, on a 2005 video made by the “Access Hollywood” show, about grabbing and kissing women without their permission.

Then the lead character on the “Apprentice” television show, Trump said on the video that he got away with the actions because he was “a star.”

Trump’s actions have received renewed interest since movie producer Harvey Weinstein has been accused by dozens of women of inappropriate sexual acts. Weinstein lost his post at his family company; the fallout also has tarnished journalist Mark Halperin, who was suspended from his MSNBC and NBC analyst roles after several women accused him of harrassment when he directed political coverage years ago at ABC News.

Trump has maintained his innocence during his presidency, as he did in the campaign.

Eleven days ago, during a press briefing with Senate Majority Leader Mitch McConnell (R-Ky.), Trump was asked about his campaign being subpoenaed by one of his accusers for documents related to the 2016 allegations.

“All I can say is it’s totally fake news. It’s just fake. It’s fake,” he said. “It’s made-up stuff, and it’s disgraceful what happens.  But that’s [what] happens in the world of politics.”

Earlier, Trump told reporters that he was not taken aback by the alleged actions against Weinstein, a longtime Democratic donor.

“I’ve known Harvey Weinstein for a long time.  I’m not all surprised to see it,” Trump said on Oct. 7.

Asked about the accusations leveled against him, Trump attempted to brush them aside.