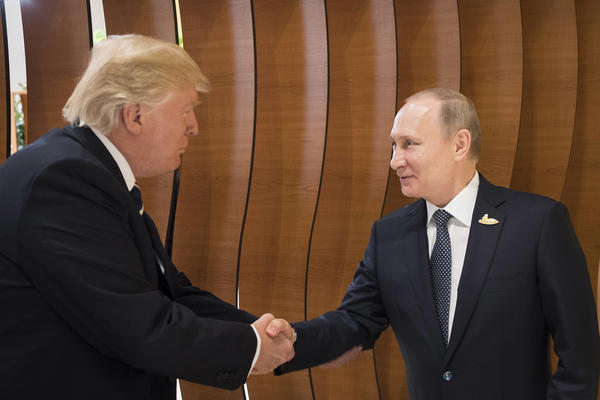 President Trump said he had a “tremendous meeting” with Russian President Vladimir Putin, his first public description of the closely watched meeting with the Russian leader that lasted more than two hours Friday in Hamburg, Germany.

Trump made the comment to reporters gathered for the start of his scheduled meeting with British Prime Minister Theresa May on the sidelines of the G-20 conference Saturday.

“[Secretary of State Rex Tillerson] and I had a tremendous meeting yesterday with President Putin, and we’ve had really great meetings with a lot of people,” Trump said, adding that he and May have “developed a very special relationship” and the two plan to discuss a “very, very big deal” on trade during their meeting.

Trump and Putin agreed on a limited cease-fire in southwest Syria and discussed how to bridge their differences on Ukraine, ending North Korea’s nuclear program and cyber security threats.

But the White House and the Kremlin offered seemingly contradictory accounts of their discussions about American intelligence findings of Russian meddling in the 2016 U.S. election.

Trump has said it is a “hoax” that Russia acted to influence the election. During a news conference in Warsaw on Wednesday, Trump refused to definitively blame Putin’s government for having a hand in the theft and release of emails from Democratic party operatives.

“I think it was Russia, and it could have been other people in other countries,” he said. “I think a lot of people interfered.”

« When Will Electric Cars Go Mainstream? It May Be Sooner Than You Think – New York Times
G20 summit: Leaders seek to bridge climate gap in Hamburg – BBC News »