Lots of noise, no fireworks, at Trump protest in Reno – Los Angeles Times 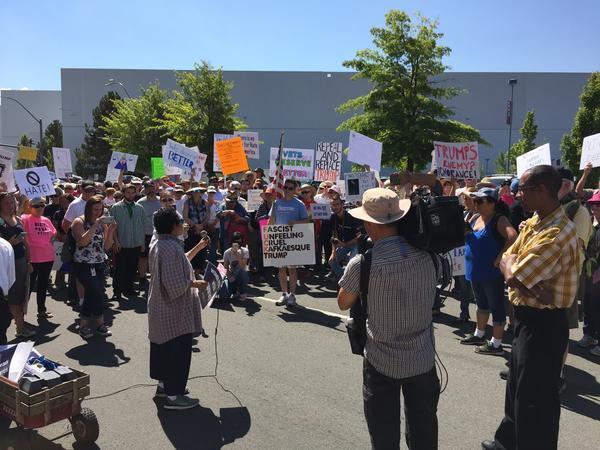 Just over 1,000 angry, boisterous, yet largely peaceful protesters on Wednesday welcomed President Trump to Reno, a city thankful to be spared the kind of clashes that erupted the day before during the president’s visit to Phoenix.

The protests on the streets outside the Reno-Sparks Convention Center broke up just under two hours after Trump’s relatively concise speech at the American Legion convention, with police reporting no arrests of serious incidents or any kind.

“I was very happy but not surprised,” Reno Police Chief Jason Soto said.

Soto said more than 100 police officers were stationed on the streets and inside the convention center, an overwhelming show of force to help keep a lid on things. Police officials also met with the main protest organizers over the past week, including Indivisible Northern Arizona, to help avoid any flare-ups, he said.

“It turned out exactly how we planned for it to turn out,” Soto said.

Anti-Trump protesters started pouring into downtown Reno around 10 a.m., an hour before Trump was scheduled to speak, and were penned in on West Peckham Lane, which had been closed off by police.

A much smaller group of pro-Trump supporters were corralled on a separate street, keeping the two sides apart.

Katie Dills clutched a Trump sign as she spent the morning screaming at protesters 20 feet away, calling them a “bunch of baby killers.”

“They believe in abortion and homosexuals, everything that is against God,” said Dills, 40, a homemaker from Reno. “Their eyes are closed to the truth. God put [Trump] there. They’re full of hate.”

Trump supporter John Franklin Smith was a little less hostile, but just as loud. Draped with an American flag, he spent a half-hour screaming at protesters.

“We just came here to support the president,” said Smith, an Army veteran from Reno. “None of us are white supremacists; none of us are Nazis. We’re American citizens.”

But Silke Pflueger, a retired engineer and member of the activist group Indivisible in Truckee, Calif., said the fervor whipped up by Trump has some disturbing similarities to what happened in her native Germany during the mid-20th century.

“I think it’s very much the same situation,” Pflueger said, and then took a jab at Trump’s “Make American Great Again” campaign slogan. “Hitler came into power to make Germany great again after World War I.”

She said her own grandparents never spoke out when Hitler rose to power, and she promised herself never to make that mistake.

Protest organizer Laynette Evans of Indivisible Northern Nevada said she doubts the protest will have much of an impact on Trump. But she said she hopes it will influence Republicans representing Nevada. That includes U.S. Sen. Dean Heller, who was a  target of Trump’s wrath when he opposed the GOP’s initial effort to repeal and replace the Affordable Care Act.

“We want Trump to go,” Evans said. “We would like Heller to hear our message. He’s got to stand up.”

After Trump’s speech, Ron Abbe, an American Legion member who now lives in Puerto Vallarta, Mexico, said the president received a warm welcome inside. Abbe, a Trump supporter, didn’t mind seeing all the protests when he walked outside the hall.

By early afternoon, traffic was flowing on Reno streets that had been blockaded with giant dump trucks all morning.